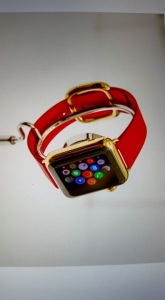 Pick a divisive issue in the news. Write a two part post in which you take on two personas  and approach the topic from both sides.  In response to The Daily Post’s writing prompt: “A House Divided.”

Those who can’t: Who in the world is going to fork over five figures for these things? That definitely was the question.  When Tim Cook  initially announce this forthcoming product, very little was said except that the cost is above 10 grand. And so began a wave of fun poking and free advert, on the days after,  turns out that there will a limited edition with a price tag of 17 grand.

Those who can and would: Silence but listening. Basically those same people that wouldn’t fork over 17grand. Because on April 24, when this watch comes out  the price range is from 349 to 17k. The cheapest  being the 349, while the next one ranges 599 to 1k. Sales would be made on the latter.

What do you think? Cancel reply

Tips for many aspects of living

She Marie
Musings Of A Bibliophagist

daily blog of a 51-year-old

Highs and lows of life.

dissolving lines in the world through understanding them

Traveling the World and Doing Good

A year of reading the world

The Art and Craft of Blogging

A rather droll affair

Last life in the Universe
keithgarrettpoetry

Smile! You’re at the best WordPress.com site ever

Confessions of a Readaholic

"Happiness can be found, even in the darkest of times, if one only remembers to turn on the light." - J.K.Rowling

"How far can you go for love?"

Reflections From the Heart

From my heart to yours.